Anton Pulvirenti is an Australian Artist based in Sydney

The great thing about mural painting and drawing is its size. The relation between the movement of the artist and the surface of the wall holds tremendous excitement and promise. Mural painting’s directness and colour make it the perfect narrative medium. A great deal of information can be conveyed in a way that cannot be … END_OF_DOCUMENT_TOKEN_TO_BE_REPLACED

I spent the 1990’s building up my skills with a foundation of life drawing. I studied with the artist and draughtsman David Paulson for 7 years. David emphasised the acquisition of basic skills through intense observation of the human figure. Later on I attended the Julian Ashton art School in Sydney. These skills became the basic tools of … END_OF_DOCUMENT_TOKEN_TO_BE_REPLACED 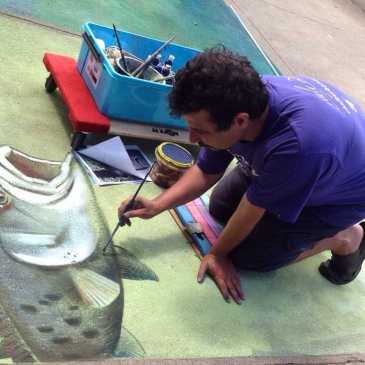 3D chalk art and street painting combine large scale drawing with multi-point perspective. I began making 3D chalk drawings in 2006 at Chalk Urban Art Festival in Sydney. Since then I have made many 3D pieces both in Australia and overseas. I enjoy the large scale aspect of 3D illusions, and the satisfaction of producing something exciting after a … END_OF_DOCUMENT_TOKEN_TO_BE_REPLACED

Live art performances are interactive and entertaining. Artists bring energy and provide a talking point at events, conferences and exhibitions. Visual Minutes, uses artists to draw your message live in front of an audience making your presentation much more informative, entertaining and memorable.